West African Motorcycle Diaries: Trying and Failing to get into Ivory Coast - Attempt #1 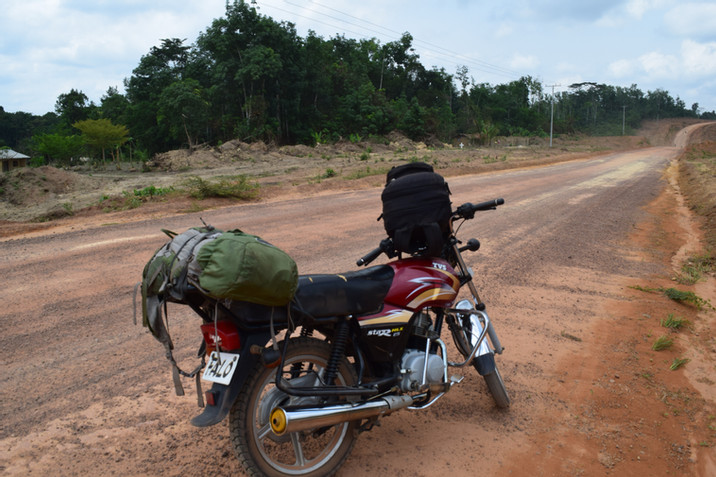 I was in Monrovia, Liberia and I wanted to head east into Ivory Coast. When I asked around in Monrovia about a direct route - I was always met with doubt. Even when looking online there were no clear answers for what way to follow or how many hours it might take. I assumed this was because of how obscure the trip would be- it isn’t a journey that your average vacationer would undertake. But I thought, hey- I’m not the average vacationer! And besides, on the map it didn’t look too difficult. Head up to Liberia’s second biggest city- Ganta, and then over the border and stay the night in Man, Ivory Coast. Google maps said it was about 450km and would take 7 hours. They’re notoriously wrong in Africa, but I thought that even doubling that, I could be there that evening. I even had a hotel name written down for when I arrived.

But my optimism was quickly revealed to be ignorance. Not only would I end up on the road for way more than 7 or even 14 hours, but I never actually made it to Ivory Coast. And it was not straight forward nor easy.

The first day began early. A friend I had made in Monrovia drove me to the bus terminal far out of town and got me a good seat in a car headed to Ganta. He instructed the driver that once we arrived I should be directed to the cars toward the Ivory Coast border. It was a slow but straightforward morning drive and we reached a little over 4 hours later.

The first surprise of the day came after I asked to be shown the cars heading to the border and instead got directed to five men waiting on their motorcycles. They explained that no cars were going to the border and I would have to take a motorbike. At first I protested, thinking they were trying to trick me into the more expensive option – but I quickly realized that I was being ridiculous. Looking around there absolutely did not seem to be much action on this road. Also, taking a look at the narrow dirt road full of potholes, it definitely seemed more likely to make it there in one piece by motorbike.

So I strapped in my big backpack to the rear, the driver wore my small bag on his front, and I hopped on and we were off. I’ve ridden on the back of motorbikes occasionally throughout Africa- mostly in the East where they’re called, boda bodas or piki pikis. Ever since being in a minor accident on one, and realizing that it was much too common of an occurrence, I tried to avoid them at all cost. So knowing that I had a four hour ride ahead of me, without a helmet, I was a bit nervous.

You have to put a lot of trust into the rider in front of you. Not just that he’ll drive safely and avoid the biggest potholes, (which you can assume he’ll do out of concern for himself and his bike), but also that he won’t just pull into the forest, push you off, and take all your stuff! It would be way too easy for him to do so. And especially in a part of the world where many had been recently ravaged by the ebola crisis and the economic effects of it shutting down trade, there’s more than a slight worry that he won’t turn his good fortune of having a foreign passenger into an opportunity to get a bit more than half a day’s pay.

Beyond the worry, it’s slightly awkward to ride on the back of a guy’s bike for hours and hours. You’re strangely close and have few things to grab for when you hit a bump. You also can’t really communicate because of the wind. So it’s basically a silent pseudo-homoerotic brotherhood- you put your life in his hands, but try and sit as far back as possible.

The ride though was mostly uneventful. We passed only a dozen or so other riders, with everyone slowing down and doing a double take when they saw a white guy headed through. At one point our tire got flat and so we pulled into some village where a mechanic gave a new innertube. I’d never really seen a motorcycle tire get changed like that and it was really interesting to watch. Part of the ride was along what will soon be a new highway- they’ve flattened out the earth but not yet laid any asphalt. I imagine in a couple years there will definitely be cars going along! Most of the journey there was tall forest on either side of us which gave for a pleasant setting and nice smell.

Right around the time I thought I couldn’t handle another bump, we were near the border. But before we arrived we were given bad news. A passing rider told mine that “white people can’t cross.” Confused, we decided to continue forward to be told ourselves. Sure enough, the word was that even though Ivory Coast had announced they would open their borders (they’d shut them because of ebola) the actual order had yet to be given. They would let locals cross if they were coming back the same way, but it wasn’t possible to get an entrance stamp.

At first, the Liberians were nice and allowed me to walk over to the Ivory Coast side to double check. The driver came with me but the Ivorian soldiers, who spoke no English, just shook their heads and pointed us back across the bridge. Then things got slightly scary as a new guard on the Liberian side began accusing me of breaking the law by crossing without an exit stamp. I said that I’d been told by the guards that I could go and confirm, but he was having none of it. I think he likely just wanted money, but I played dumb. He said, “who is in charge of your passport?” I pointed to the intro section and said calmly, “Secretary of State, John Kerry.” He became a bit livid, I suppose he wanted me to say that at this border he was in charge- but I wasn’t about to stroke his ego or line his pocket and so after a bit of a standstill, I retrieved the passport and was on my way.

But to where…. I had my Ivorian visa and wanted to enter there before making my way into Mali. There were three options to make this still happen: I could go all the way back to Monrovia and then fly to Ivory Coast, but this would be exhausting and expensive. I could go along the illegal trading route through the forest that most Liberians actually use to enter Ivory Coast, but I wasn’t about to break a law in West Africa, or I could venture up a different narrow road and cross into the forest region of Guinea and try to enter Ivory Coast that way. We were told that this border was open, and considering I didn’t want to break the law or retrace all of my steps- the decision was made.

So we turned around, and at a fork in the road, the driver stopped and asked me to confirm. And then I had a realization. I didn’t have more money to pay him to take me anywhere else. I had large bills of $100 and 100 euro, but needed to give him only $15 or something. We got in a big debate- and I could tell that he really didn’t want to just abandon me, which made me feel good, but was also mad to take less than what he thought he deserved (I think it was still more than it should have been). Finally, he agreed, albeit angrily, that he would take me for the lesser amount, and we were off in a huff.

We continued on a couple more hours, deeper into obscurity in Liberia. Me exhausted from the long day and sore from the uncomfortable seat, and him upset that driving the American around the whole afternoon wouldn’t lead to the huge payday he was hoping to reap. Then it suddenly started pouring down rain and we had to quickly find cover. We made some small talk and got friendly again, and I told him that we would compromise and we could stop at the next town that had a guest house, so that I could rest and he wouldn’t have to continue too far out of his way. He agreed and soon we were in Yekepa.

Yekepa is a strange place. From the 60s-80s it was a bustling town because of a large iron ore mine. Hundreds of Western expats came here to live; they built beautiful neighborhoods, a swimming pool, a large theater, and even a go-kart track. However, all of this stopped with the start of the First Liberian Civil War in 1990 when all foreign mining companies left for safety and were then banned. This left Yekepa largely a ghost town. However, in 2005 global mining giant Arcelor Mittal bought the rights and became the first foreign mining company to export from post - conflict Liberia. In some ways the town is being revitalized but the going is slow. The old movie theater is abandoned, there seems to be no one coming nor going from the large office buildings, but the church does have a new coat of paint.

Because of this history there is one relatively nice guest house in the town, where you have to pay some absurd price for the region of like $50. The first thing I did when I got in the room was to look in the mirror, and when I did, I almost screamed. I had never been so dirty. After 10 hours on the bike, my white shirt was brown, my skin was caked with dirt, and my hair was standing up tall from the wind and felt thick to the touch. It took me two showers to feel even slightly clean.

After my shower I decided to walk around a bit. There was something special about Yekepa. Towns like these, far from the capital, with few if any foreigners passing through, are so lovely and unique. I like to meander around to find and appreciate the little bits of beauty. It's everywhere! Even if the meaning or importance isn't global or world-known, everywhere is interesting. I asked about where I should eat and they pointed me to the canteen of the mining company. It was buffet style and I had a good time talking to the chef. It was the biggest meal I had eaten in days, but weirdly the hour I spent there, I didn’t see a single other person come and touch the food. Maybe they ate later.

After dinner I looked out my window and I couldn’t believe my eyes! The sky was lit up in oranges and pinks and blues. I grabbed my camera and ran outside, standing in the middle of the street of this all but abandoned mining town. I was entirely disconnected. Noone knew where I was, I didn't really have a good idea either- just knowing it was northern Liberia. And despite this lack of place, I felt found. This beauty was surrounding me and I was so much more than okay- I was filled with glory.

It had been a long exhausting day and not getting through the border was frustrating- but also the day was great. I saw a part of the world few people visit, I was pumped with adrenaline from the long hours on the motorbike, I had a yummy dinner in a strange unexpected town, and now the sky was dancing its colors. I wrote in my journal, read a bit, and passed straight out to sleep.